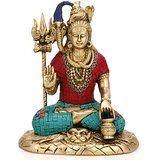 Beautiful Very Rare Hand carved Solid metal brass and turquoise Gemstone work on body of God Meditating Shiva in sitting position. The Powerful God: About Hindu God shiva Shiva is 'shakti' or power, Shiva is the destroyer, the most powerful god of the Hindu pantheon and one of the godheads in the Hindu Trinity. Known by many names - Mahadeva, Mahayogi, Pashupati, Nataraja, Bhairava, Vishwanath, Bhava, Bhole Nath - Lord Shiva is perhaps the most complex of Hindu deities. Hindus recognize this by putting his shrine in the temple separate from those of other deities. Size : 11 inches Height X 9 inches Length Weight : heavy 4.1 Kg approx Material : Brass , Turquoise and other coral stone Background of the Product & Stone: The turquoise stone is rare and valuable in finer grades and has been prized as a gem and ornamental stone for thousands of years owing to its unique hue. Since at least the First Dynasty (3000 BCE), and possibly before then, turquoise was used by he Egyptians and was mined by them in the Sinai Peninsula, called "Country of Turquoise" by the native Monitu

Add-on for your order